A little story of my experience of getting back in to a huge passion of mine, carp fishing. After a 6 year break for various reasons my love of carp fishing has never left me and a chance chat that led to a forty plus common.

January 3rd 2017 6am, I’m in the van heading for a day ticket lake 100 miles from home as I live in the deepest south west. Finding a lake that interests me is hard unless I wanted over stocked holiday lakes that is, travelling to the lake early that morning I must admit I was feeling a little nervous as I had been away from carping for awhile and things change massively as I had found out when I had been getting all the gear together again.

I’m full of excitement as any carp angler will know at the thought of two days by my bit of blue.

I arrived to be met by the owner and pointed in the direction of the lake and my swim, as I make my way through the otter gates I noticed a sign that said “syndicate parking only” but dismissed it at the time.

In the swim and setting up I’m watching the water for any signs but seeing as there’s frost on the ground due to it being -3° over night I’m not hopeful of any and nothing was seen at all, so out with the plumb rod to find some spots.

Half an hour later I’ve found enough spots to fish to for a year but three really take my liking, two rods in silt and one on gravel with standard hair rigs which served me well before no more than forty yards out surrounded by a light scattering of bait.

The first  night passes without a bleep or any indication of fish and I’m questioning my decision to come so early in the year but I’m enjoying it, just being here is enough at the moment.

Later in the day the owner, Dave comes round and after a good talk my confidence is back up to top level again as he tells me it will happen at some point and well he should know after all it’s his lake. So I redo the rods and settle in for the last night praying something would happen.

Something did happen I slept well til 5am until I woke ready for a brew, sitting on my bed-chair brew in hand and thinking I would have to wait for the next trip for my first bite, when at 8.30am the middle rod just took off I froze for a split second but then rod in hand it was as if I hadn’t been away, the buzz, the adrenaline pumping god I had missed it.

On the mat after a little tussle was my prize 14lb 2oz of common carp and me, one happy angler, just after Dave calls over the lake “you had one then I will put another one in for you haha” I knew I was going to get on well with him.

It wasn’t until the third week in April that I was able to get another chance to go due to work,  I had booked another two nights on the lake in another swim.

On arriving early the lake was completely different from the last trip with leaves on the trees and budding, plus a lot warmer as well as it was now just into double figures.

The lake was busier as well with 5 other anglers on and the two I had walked passed seemed friendly enough so I was hoping to gain a bit of knowledge from them later hopefully about the lake. The swim was just around the corner from the last time I fished so I was able to fish one rod to the spot I caught from the middle rod  went towards the island in front of me at sixty yards and the left rod went twenty yards down the margin to a silty spot in front of some reeds.

The day passed quietly apart from another angler setting up around the next corner to me but before he cast out he came round and we spoke for sometime about the lake, and also the syndicate water which he was also a member of and the big fish it held and I must say it got my mind racing.

My first take came at 11pm that night with a 13lb 12oz common from the margin spot and once again I was over the moon but I was not prepared for what was about to happen, at 5.50am the same rod was away again but this time it was really giving me the run around. After twenty minutes it went over the net cord but as I was looking down at the huge mirror in the net the rod towards the island took off and a similar fight followed as I’ve always had two nets with me I was able to net another mirror as well without any problems. I now had a problem two good fish in the nets, me shaking with disbelief but the syndicate member was very helpful and called Dave as well to help out, after a lot of handshaking and back slapping the weighing and photos where done and the fish where returned to fight another day their weights were 38lb 8oz and 30lb 4oz respectfully and I still had another night to go. 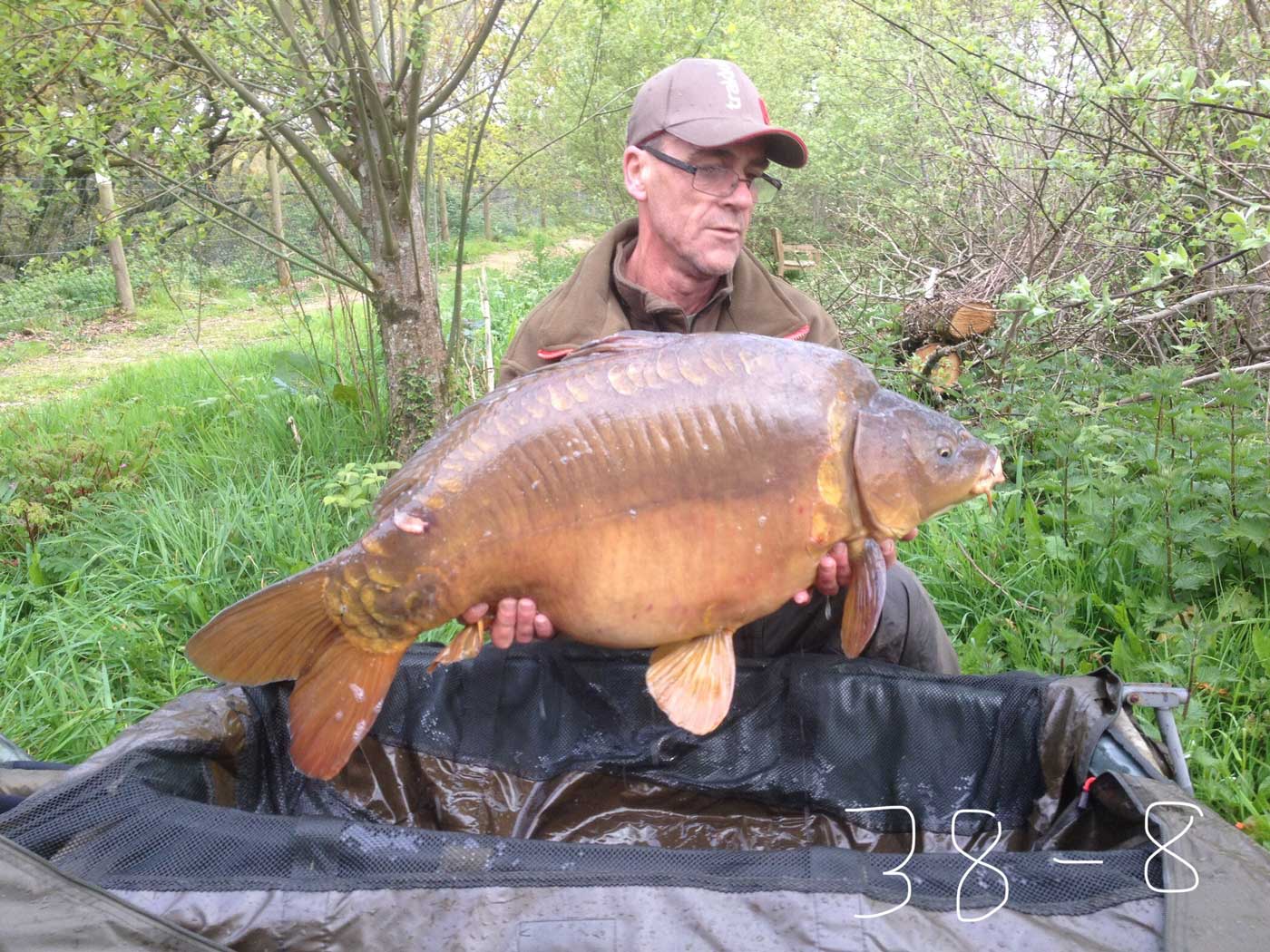 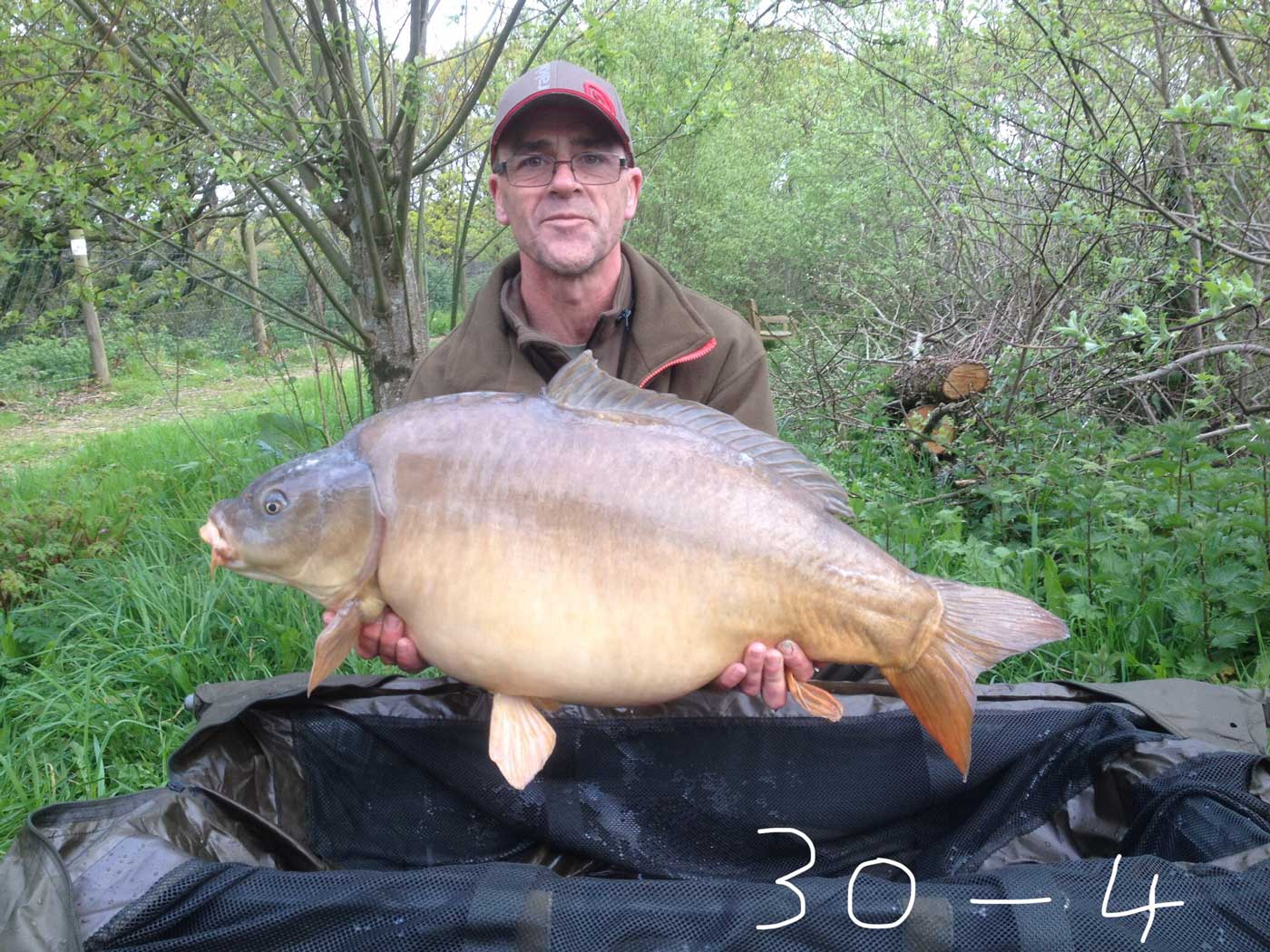 The day passed the same as the day before and my next fish came at 5am the following morning with a 10lb mirror followed by 18lb ghosts common to end this trip and what a trip, a brace of thirties and three doubles meant I packed up one happy angler. On the way out I saw Dave and we chatted for a while about the brace, the syndicate and I mentioned that I wanted to up my PB common which had been 32lb 8oz for some time to which he said “I’ve got three in the syndicate that are over forty get on there then” to which I said “when can I”, but no answer came until a few weeks later my mobile rang and it was Dave asking if I would like a ticket as a member had dropped out due to personal reasons and I could have it if I wanted it, I couldn’t get away from work and it wouldn’t be until June before I could have my first go at my bit of blue on the syndicate.

The second week of June I stepped onto the syndicate for the first time and what a beautiful place it was about eight acres, three islands, 12 well spaced swims and now I had the knowledge of stock not just three forty plus commons, but at least five mirrors over forty with one, possibly two that could go fifty at the right time with thirty’s and twenties as back up stock coming through as well, on my first walk around the lake it was busy with only a couple of swims available so I set up in a swim with an island in front of me and a bit of water to my left with a very interesting margin, a quick lead about in my bit of blue and three spots were found, one down the margin, one in open water between me and the island and the last rod two foot of the island margin all receiving a light scattering of bait and the traps were set all I needed now was a fish to open my account.

Due to the early start and setting up I layed on my bed and dozed off around eight in the evening but woke with a startle at ten as a fish crashed out no more than ten foot down the margin, as I made a brew another one did the same out in the darkness and another then another it seemed like the whole stock were doing it but not a single bleep on the rods, I sat listening until they stopped. Then I dozed of again about 1am but within fifteen minutes my island rod was tearing line from the pool and I was playing a good fish towards the net, after ten minutes of boring deep in the margin a good mirror was safely in the net, a member in the next swim helped with the weighing the fish at 34lb 10oz sorted the photos and back it went and my account well and truly opened. 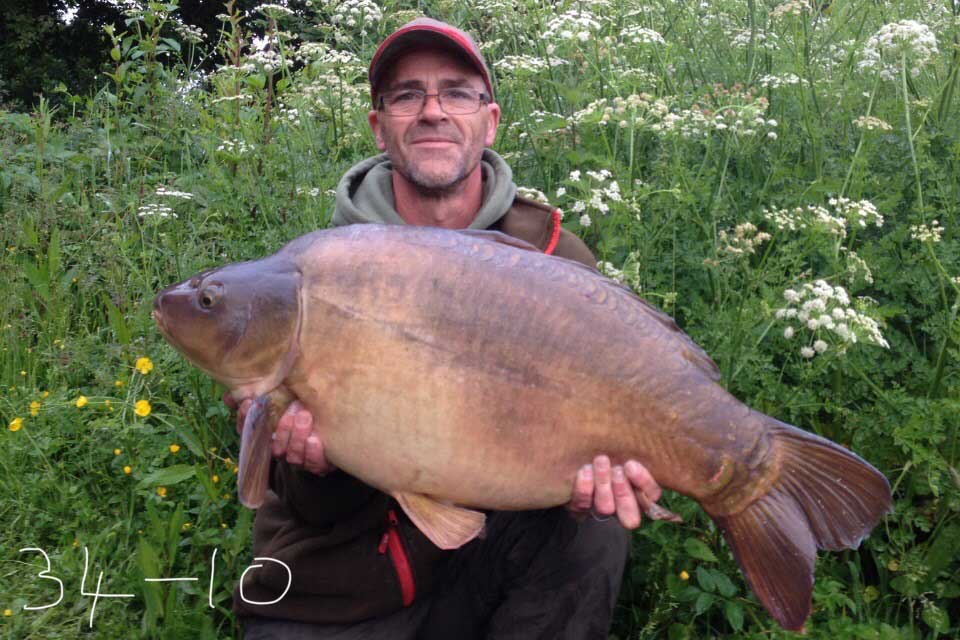 Not being able to get back to sleep I just sat with a brew in my hand watching the water and the rods when the margin rod bleeped once then the tip bent round and I was into another fish, this one didn’t fight at all and was soon in the net and turned out to be a 15lb common which I was later told was one of a few new stockies that had been put in recently but I was still happy and that was the last of the action for me apart from seeing a huge common well over forty sunning it’s self in a quiet corner the next day before I left for home. 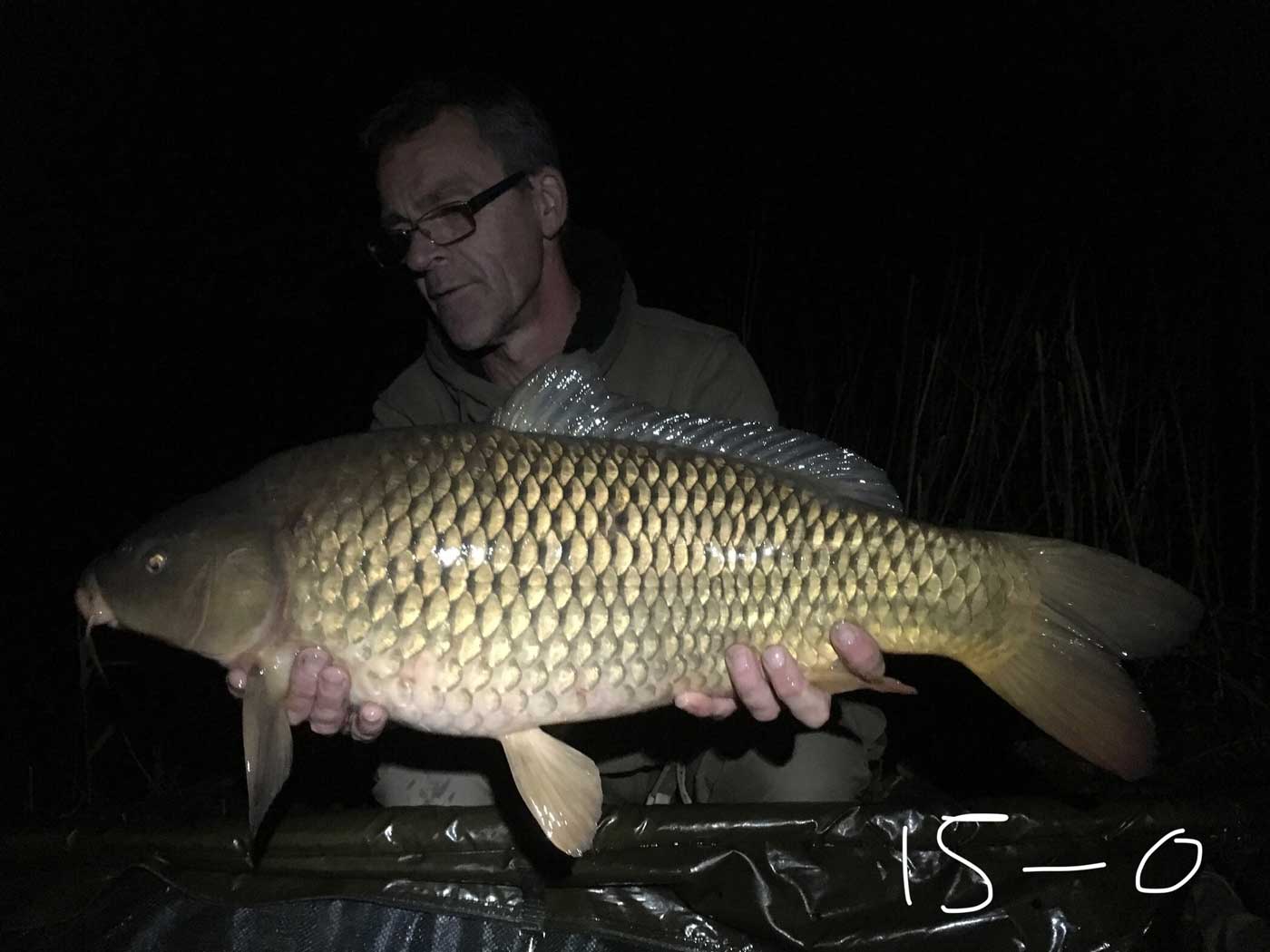