This is a lovely book by top Essex carper Dave Levy. It’s an autobiographical book, covering Dave’s angling from his first picking up a fishing rod at the age of seven, and concentrating chapter by chapter on the various carp waters where Dave has wet a line over the years.

It’s an inspirational read rather than an informative one. There are no chapters on rigs or baits, or any other technical aspect, but that’s not to say there’s not a great deal of useful info that can be picked up by reading between the lines. I think that’s because Dave is an angler with an intuitive understanding of carp. Rigs and baits aren’t things he agonizes over; they’re just the tools he uses to achieve his goals.

I’ve met a few anglers like Dave over the years, guys who could catch carp without seemingly trying. Thing is, Dave does try, and he tries hard. When you put a grafter with natural watercraft talent in the middle of Essex, with multiple big carp waters at his disposal only a matter of minutes from his home… well, it’s no surprise to me that Dave has emptied most of them, usually in short order. The only way a target fish seems able to avoid the inside of his net is to die before Dave gets a chance to stick his hook in its chops. I dread to think what might have happened if Dave didn’t have a full-time job and family to keep him away from the banks at least some of the time!

I like the fact that Dave has included a mention of Carp-Talk in his acknowledgements, and I hope he knows that works both ways. Sending in his catch reports improved the content of our mag as well as increasing his own profile. That said, he certainly hasn’t reported everything to Carp-Talk or anywhere else; the penultimate chapter ‘Last of the Kings’ provides ample evidence of that as he goes all ‘Pete Springate’ and catches an unknown forty from a massive and otherwise unfished water.

Fallen Kings is an absolutely splendid piece of work, detailing just what can be achieved in a life devoted to carp fishing. Thoroughly well recommended. Produced and published by Angling Publications, you can order your copy of Fallen Kings from www.gifts4anglers.co.uk or by calling 01430 440624, priced £30 plus £3.25 packaging and postage. 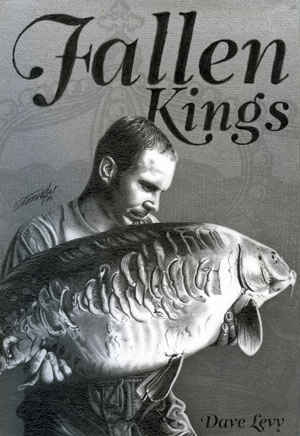