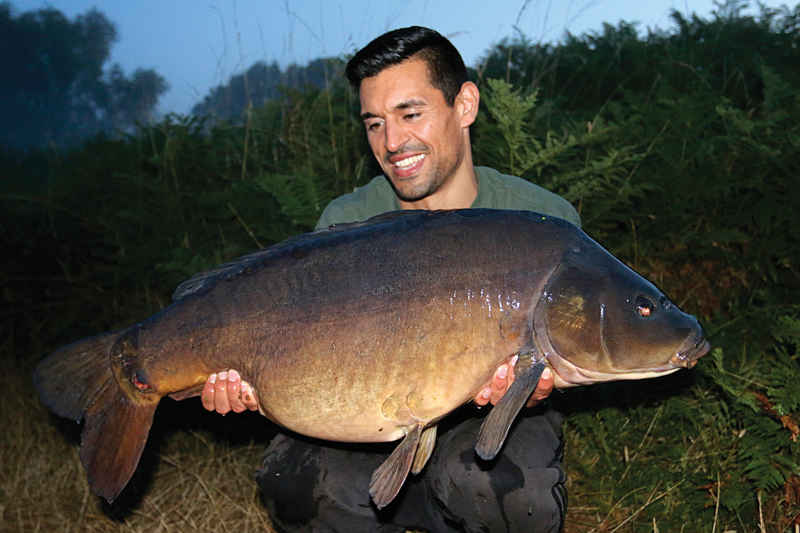 Dave Magalhaes reflects on a successful session that left him cradling the second largest carp in his target water.

The venue in question is a little bit off the beaten track and contains some lovely Claremont strain carp, which is very typical of the lakes in the area. In fact, many, many moons ago now, before anybody knew any better, some of my friends actually helped stock some of the local park lakes with some of these Claremonts and they’re now some of the most sought after carp in the area. Anyway, these lovely high-backed, clean-flanked mirrors have thrived in the majority of the homes they have ended up in, a few even creeping over that magical 40lb mark. This particular lake I’ve been fishing holds a few of these special carp, although nobody that I know of knows how the big they actually go. I’ve walked round the lake a fair few times and fed the fish repeatedly, so I have a pretty good idea of what’s swimming around in there. The big ’un itself, although not colossal by today’s standards, is certainly worthy of a little campaign.

Over the past few weeks, I’ve managed to get over to this lake and keep the Code Red boilies trickling in on one particular spot. Although at first the majority of the fish I was catching were small, the bigger fish eventually moved in and with every capture, the carp just grew. I knew it was only a matter of time before one of the big mirrors turned up and I found myself getting more and more nervous with every passing capture.

The fish were very routined and most of the takes were coming at around 3am. On this particular night, I felt close. The fish were getting bigger and I knew that it was only a matter of time. At exactly 3am, my left-hand rod was away. It flat-rodded me from the off and kept going until it found sanctuary in a weedbed. It came free with very little pressure and I soon had the fish and a huge ball of weed coming towards me. The fish didn’t fight once all the way in until 10 yards out when it rolled, then again a few moments later when it thrashed on the surface. I tried to scoop it up, but had misjudged the depth of the fish and the ball of weed and somehow managed to push the whole lot away with the net – need it! The fish woke up and powered off to the right, taking line from a tight clutch. It then ran me ragged for a good 10 minutes, going from left to right, weedbed to weedbed. Eventually it began to tire, but there was still a big ball of weed on the line that was making it difficult to net the fish. The next time its head came up, I got hold of the line and pulled the whole lot towards me, then pushed the net under him and lifted. Looking into the net, a long old mirror lay there, tired and beaten; it wasn’t the big ’un, but in fact the second biggest mirror.

I’m going to hold back from mentioning the weight until I’m lucky enough to catch the big ’un itself, but this capture made all the effort worthwhile.