We booked onto Furzebury carp lakes in South Molton, in Devon. Set in the County side, surrounded by woodlands and green fields. It offers the angler the best carp fishing in all of the south west.
There is approximately 100 carp present in the Island Lake most of which are over 20lb, 30 + fish over 30lb carp & 7 over 40lb to a lake record of 47lb 4oz. It was built in 2006 and was stocked in 2007. There are reeds all around the lake providing plenty of features to fish to. Each Carp Fishing Swim on the lake offers the angler some thing different to fish to.

We booked a lake exclusive on island lake. This was a natures baits social event, which turn out to be the best and unforgettable trip of my life.

Having fished the lake a few times in the past, I knew it wasn’t the easiest lake to fish.

We all draw pegs and I ended up drawing the point swim.

Using a simple naked lead clip system casting to the far bank. Which then I had to walk around clipped my rig on and spooned it out.

My rig was a simple German rig, size 4 wide gape hook. Knotless knot using the redemption soft coated hook link. Which then I pushed on a bait screw onto the hook, which then followed by a hookbead. All Supplied by hybrid tackle.

My bait tactic was natures baits scud boilie. Using the white ice wafter which screwed onto the bait screw attached to the hook, I simply scattered 100 boilies over the top.

All my fishing is the same approach to every lake I fish. As I have one hundred percent confidence in the tackle and hooks I use.

In the back of my mind I was thinking ‘1 fish would be good going!’ which turned out to be completely opposite.

We all turned up Friday afternoon in 30+ degrees heat, I found my spots and baited up. I didn’t fish untill 9pm that evening. After getting my rods out I could chill out with the lads and have a good coder.
My first take come at 3am over the far margin. What a fight! She took me everywhere. I knew it was a big fish as she kept solid to the lake bed. I seen her head rise and at that point my legs could of gave way, finally landing the fish, I gaized into the net and my god I couldn’t believe it,my hands started shacking. Once I got her on the matt I then realised it was a fish called orange spot, an absolute beaut!
We all weighed her and boom, smashed my personal best by 10lb! She weighed 42.4lb I was buzzing, well made up! 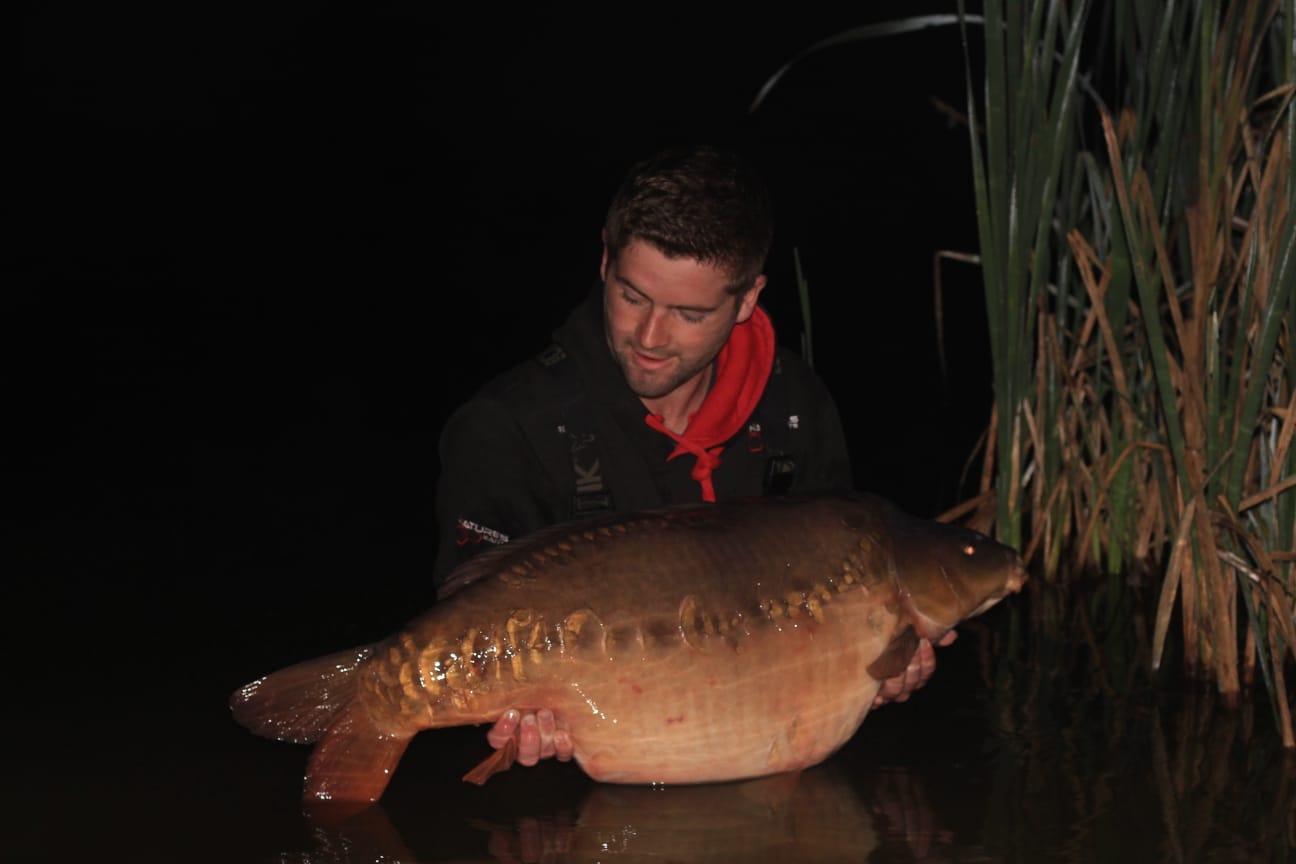 30+ buckets later I managed to let her go. That feeling catching a personal best is unbelievable and can not put into words.
I never slept the whole weekend after that.

Using the same approach and tactics, I managed to bag myself another lump at 8am the next morning. Measles the fish was called. Weighing in at a massive 36.2lb.

After resting my swim the following day in the blazing heat. I again didn’t fish until 9pm Saturday evening.
Come Sunday morning at 6am I bagged another. Weighing in at 28lb.

All mirrors but all absolutely mint looking fish.

This trip turned out to be a dream trip.