Cheesecake has started from a creative humble origin and has since morphed into something that becomes a creative baker’s best dream. The dessert which is very popular in restaurants and as an after meal treat has taken its basic form and become so much more. Made from cream cheese and a biscuit style base, cheesecake has since taken on more and more complex flavours and forms which has increased its popularity. Flavoured with may different notes, the cheesecake has become a firm favourite with dessert fans all over the world. Originating in Ancient Greece (or the 1300s as some suggest), Cheesecake started taking on the form we know it as today during the 19th century when the invention of cream cheese and the use of eggs over yeast in the recipe made it a much sweeter dish. Cheesecake is found all over the world and it is one of the only desserts with its own regional style, from Asia and Africa to the West and even Australia.

Cheesecake fishing flavours are great platforms for building a flavour that is right for you due to the simplicity of the mix as a base. With notes of cream, vanilla and other flavours, it can be as complex and creative as you wish it to be. Cheesecake aroma is heavily dependant on its mixed flavours with a rich and heavy biscuit style aroma combined with the notes of cream and other flavours giving this fishing flavour a real new approach to baiting. Cheesecake fishing concentrates are ideal for making fishing bait such as boilies, pop ups, ground bait additives and as part of a spod mix. If you want to take your fishing flavours to a whole new level then cheesecake would be an ideal choice. 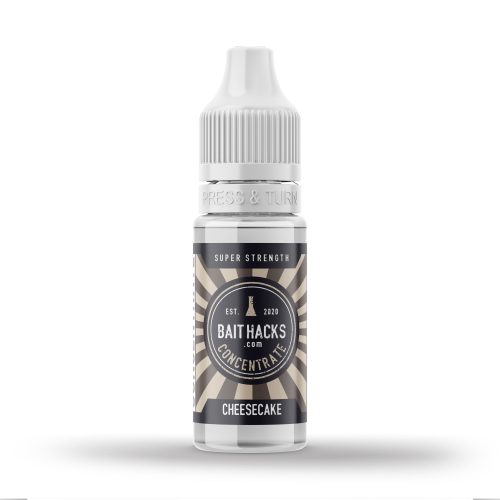