Indian Spice is one of the more recognisable spices in the world today through their distinctive tone and flavour that makes their cuisine very distinguishable. Spices such as turmeric, pepper, cardamom and cumin are part of the many spices used but their flavour is best known in a lot of dishes originating from Asian food dishes. Indian curries use plenty of Indian spices which creates almost a curry flavour perception of the spices themselves. Even the aroma of Indian spices is instantly recognisable to many around the world making their collective flavour and tone very popular. Many of the spices involved are native to Eastern Asia and have since moved west due to the spice trade during the middle ages, there is nothing else like them in the food world and even to this day they are a very popular flavour profile.

Indian spice fishing flavours are very special in the way they combine different tones and notes together to form a very complex mix of flavours. Whether it is spicy notes of some or more dull notes of another, Indian spices can give you an incredibly mixed flavour for your fishing bait. Aroma wise they again have a complexity of scents that are almost like no other fishing flavour to use, with the little notes of each combining into a complex aroma that ticks many savoury boxes. Indian spice flavoured fishing concentrates are brilliant for making fishing bait, including boilies, pop ups, groundbait additives or as part of a spod mix. If you want to use a fishing bait that brings many savoury tones and flavours then Indian spices would make an excellent addition to your next fishing trip 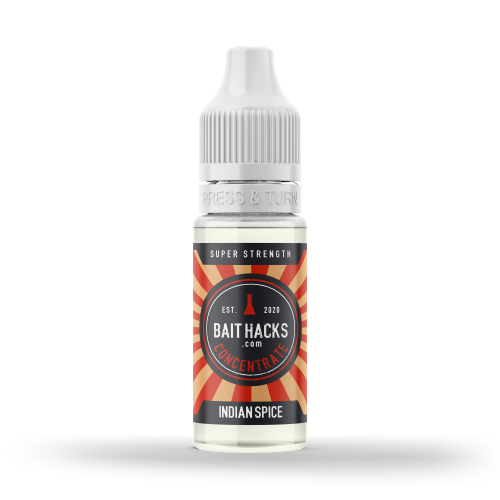